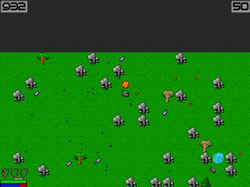 What does this do? I'll let you figure it out.

This is an actual game now. New this day are the enemies, the cool explosions, your score, and metal. Metal is actually useless until I get the uprade screen done, (ETA: Tuesday) but the game is actually playable.
Version 0.03

Real life interfered, so I wasn't able to get much done. Still, you can now fire, and destroy rock/trees. You can also lose the game, via running out of water or wood.
Version 0.02

I've got the interface and colision-detection working, but no real game yet. Still, you can run around and bump into rocks.
Version 0.01

As with last year, I'm putting diary entries over here:
http://www.emhsoft.net/pyweek2/
(Oddly, links don't appear to be working over here.)