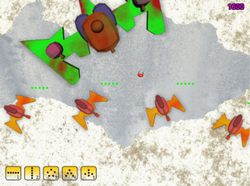 Our game is Robot Supremacy ... a fast action-packed top-down scroller set on an icy wasteland. Your robots can run in formation. We even added a boss at the end.


47% respondents marked the game as not working.
Respondents: 12

Our game is not in the torrent (we had an upload problem) ... so if you haven't played Robot Supremacy yet please download it separately!

A colleague and myself sat down Monday after work and decided to make a game using pyglet. Neither of us had ever used the library before, and it probably shows in our code! I am seasoned veteran of pygame, and I doubt I will ever go back to pygame, as pyglet, despite it's rough edges, is already better. A third colleague joined us on Tuesday, and we had a few more hours on Thursday night to work on it. So we got a lot done for the very small amount of time we could spend on it.

Things I like about our game:
- it's "complete" (if basic and short), there's a full level from start to boss (it only takes about three minutes to play)
- the graphics - I think it is the best looking game in pyweek 6!
- it's expandability - it should be easy to add levels to make it a big, real, game. Especially a volcano/lava level
- the AI on the enemy tanks ... we were aiming for early 90s arcade adventure and I think the enemy tanks really capture that feeling.

What I don't like:
- We had to strip out a lot of ideas, including
* transforming your robots into tank and helicopter and battleship
* air strikes
* bridges + water
* NPCs items you could blow up (eg huts)
- the bugs - pyglet memory leak, the boss doesn't fire bullets from his other canons
- lack of menu + save + highscores (always the first things to go)

There we go, my postmortem on Robot Supremacy!

Well, after 12 hours of work we've got ... something interesting ... whether we'll have something good by the end is another question. We wanted robots, we wanted kick*ss guns, so robots + guns = robot tanks!