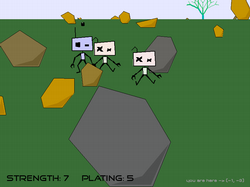 
3% of respondents wished to disqualify the entry.
Respondents: 26

Since pygame runs on the gp2x console I have been thinking about writing my game to scale for the 320x200 screen as well as the PC. I wonder if anyone else has a gp2x? Maybe it's worth adding it to the hardware poll?

Just in time for pyweek I've finished this very quick and very dirty vector graphics editor. You can find it here: http://mccormick.cx/dev/puffer-release.tar.gz It saves polygons in a datastructure which can be traversed to get the arguments for pygame.Draw.polygon() calls. Well it's 5am here so it's time for bed. Good luck everyone!

Day one went pretty well. Settled on an idea without even really thinking about it. I started coding up quite a generic game architecture, events handling, graphics management code etc. Brain stopped working pretty early from lack of sleep from coding the night before, so I switched to art and got many of the game objects drawn. Today my cold/flu has returned somewhat, but I'll be trying to focus on getting the background scaling maths working correctly, and animating the player's avatar.

Well day 2 did not feel as productive as day 1. Spent most of the day trying to get a 2d faux-3d scaling thing to work and started on a couple of the procedurally generated background elements in the game. I guess I did actually write a fair bit of code; it just doesn't do that much on the screen. Today I will be focussing on procedurally generated backgrounds, and putting some pick-up-able items in the game.

That's a lot of money for two days work!

Day 3 went better than day 2, but not as well it seems as day 1. Still, there are now weird looking squiggles and awkward blocks across the landscape of my game (which is a good thing). Also, there is one type of object which has a randomly selected behaviour, and opens up the door for other types of objects your player can collect. The player can now collide with things using very rough collision detection. Today I need to do some other work but I will continue with the pyweek game later in the afternoon.

day 4 went pretty well. i got the player's inventory and picking up of items working with graphics too. today i am going to work on the procedurally generated elements of the game some more.

day 5 - Anyone got Perlin Noise?

Wow, day 5 went really badly. I spent the day paralysed by the looming deadline, trying to code a part of my program that I thought would be fast and easy to code but has turned out to be difficult; random functions. Perlin noise is really complicated for a stressed out brain! If anyone has a Perlin noise implementation in Python I would really appreciate knowing about it!

Day 6 I was pretty busy with other stuff. I started really freaking out aobut how much I have left to do. Richard helped me get smoothed noise working and I tested it out in the game, but unfortunately it might be too slow to use. Last night just before I went to sleep I realised which bits I need to cut from my game to make a last dash to get something playable so today I'll be focussing on implementing a very minimal set of features towards that end. I might even have something to show in 21 hours and 7 minutes. :)

after feeling disillusioned and sorry for myself for a few hours i sent my partially completed game to a friend of mine, who played it and then gave me a pep talk. So it's time to make a last ditch effort to get some kind of gameplay into the game world. About five hours left for me.

well, i'm done and going to sleep. my final entry can be downloaded from my page. if you want the music, download music.tar.gz and unzip it in the game directory. good luck everyone!

I've released my pyweek game onto the net a bit polished up, with psyco, and with a windows installer. Note this isn't my official entry as work was done on it after pyweek so please don't use this when judging my entry. http://chr15m.livejournal.com/38007.html