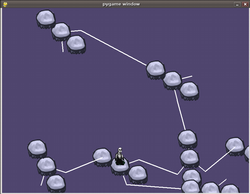 A Pyweek 5 entry by Skalle

Not really a team as I'm the only one. Not sure if I'm going to participate.

I haven't done much, I actually started today. I'm not sure if I'll finish. At first I wanted to use pyopengl, but it didn't like me, so I am using pygame instead. My idea right now is that the hero is some guy jumping around on some platforms (top-view) and doing something (descriptive, huh?). It might not sound like it but it will take a lot of time and work to get this working the way I want it. Not much to show yet, but if I make something worth showing I might post a screen.

I've put up a screenshot of the game as it is right now. I don't think anyone can tell what it is without a proper explanation, so here's one: The hero (you) is a twisted little demon/magician. For some reason or another you jump around on these platforms, bound together by electricity. As you can only jump a small distance, you can change the platforms' positions by standing on one, and then twisting the closest radius of platforms (meaning you rotate the platforms directly connected to yours, around your own), creating new connections and making it possible to find new paths. Although it works to create and connect platforms and rotate them around yourself, the game is very buggy and I should try to make some fun elements before the end of the competition also.

I rested a lot today and didn't get much done. I added some diamonds that will increase your score if you pick them, and I tweaked the attracting/repelling functions although they're still bad. I have fixed some small bugs but I think that I probably added more bugs today than removed. And I want to say in advance: for those who might look at the source, it looks like that just because I don't have unlimited time. After all this is pyWEEK.

A good thing is that I got lots of ideas that will make the game fun if I have time to add them.