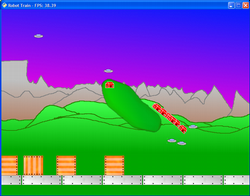 A Tower Defence game in 2d, seen from the side, driven by physics!

If the Robots In Saucers runs slow...

It's (to some extent) due to a bug in pyglet, but it's easy to fix.

Open lib/MainGameGui.py and add this line at the bottom of the __init__ function:

We didn't to very much monday night - viblo fell asleep after work and I worked late ;)

But what we have now is something we can make a game of at least, I hope! We've got flying saucers, flying pieces of ground, and houses that spawn and land on it. All of it physics driven by pymunk and graphics driven by pyglet. :)