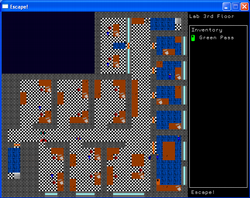 Another PyWeek attempt, but this time I personally can't spare the whole week. Let see if something cool results from this try!

For my game, I planned on doing a simple overhead-style escape-type game. I needed a level editor fast and I didn't have the time to learn pgu from scratch, so here it is. The beauty of the level editor is that almost all of the mechanics are created for gameplay (with the exception of moving sprites and wall enforcement).
I needed to move quick since I couldn't start until Monday night. Schedule is becoming quite compressed at this point...

My game idea is to help a human test subject being held against her will in a biology lab. The lab is filled with guards and scientists, some who might be nice. You need to keep her hidden while you find your way out.
Anyway, at this point the guards walk on their own and turn around when they hit walls, walking a new random direction. The person you're rescuing follows you around properly as well. The guards will now yell if they spot the escapee from a distance.
What remains to be done is map transitions (from walking down stair outside), more artwork, more maps, and an inventory and control panel. Not exactly simple!
I would have uploaded another screenshot, but as of right now, the game looks just like the map editor...

Alright, at this point, I've just finished the main menu, the instruction screen handling, and the win/lose screens. I still need to complete a boatload of artwork and maps, but that might go quickly. At this point, no sound either; sound may be sacrificed in this competition. Time is starting to become a problem. Anyone else feeling the crunch?

A Mistake that Won't Be Fixed

I made the decision to go with 640x480 for a game screen size, but I think I made the map components and sprites a bit too small, at 16x16. Too late now! The game should be playable, however.

Ok, I've uploaded a source and a py2exe final version. I've redownloaded them and tested them. Everything seems to be as good as can be. I nailed the last bugs I could find about 30 minutes ago. This was a close one...