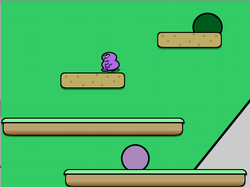 Using temp graphics untill the artist has made some

Phoenix is the cuttest Kitty in the world!

I'm new to python, Just started learning it for web development. Found this and thought it would be fun. So I'm going to code and my g/f is going to do the graphics.

I'm not sure on whats allowed or not allowed. Are things in the pygame.com/library allowed? (like Isotope or phu)?

The Contest started 8pm local time, and I stayed up untill 3am. We think we have an idea for the game. I just wanted to get a player on the screen with collision detection and gravity. Got that working, then when I tried to add jumping I broke everything :( Grr
I'll get to work a little while today, but I have to goto a leadership thing for school so thats going to eatup alot of my time. *sigh* maybe I'll upload a screen shot even though my graphic artist hasn't started yet.

Well I got back from school and fixed my collision detection and added the ability to jump! yay! Spend some time discussing ways to make level creation as easy as possible, but I think I'd waste too much time trying to make a level loader. we'll just hand code the levels, if it worked for Mario it'll work for us :D

Wow, I thought I was doing super good, and now I'm behind schedule. Creating a scrolling background that places the correct sprites on the screen as been more challenging that I originally thought.
And we still don't have any graphics, not one, nothing, nadda. *sigh*

School got in the way (shouda skipped classes :P ) I have to rewrite the scrolling section of the code, so I don't think we'll make it, but we'll try!