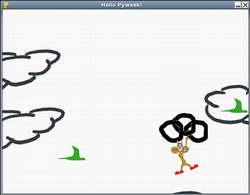 A team consisting of Jerry, sixohsix and Windex

We are finally done our first PyWeek entry. This also marks the first time we have ever used pygame. Even thought we didn't finish the game, we at least have something that moves pixels on the screen. w00t! For the next PyWeek we'll probably have a much better idea of what to expect, and a better idea of how far we can get in a week's time.

Thanks to Richard for organizing this competition! It's amazing that something like this exists on the internet. Thanks also to Richard for making the Skellington - it makes doing submissions for a newbie like me much less stressful.

Also, thanks to Wes for doing the birds, the clouds and Sammy the Squirrel in the game. I've worked beside him for quite a while and never clued into his drawing talents until this week. Thanks!

Thanks to Mike for his written-in-a-drunken-stupor bird code. It made including the birds last night much easier.

Thanks to Windex for his inspiration with the game concept and many, many other ideas before this week started. Next time, don't leave for Las Vegas on Monday night. :)

Talking to you at PyCon was infectious, so here I am. I was sitting across the table from you on Thursday before you had to leave to catch your plane.

Well, personal life being what it is, I have yet to write any code. Let's see what we can do with the time still remaining!

Whoops. Found out about 20 hours late that PyWeek has started. Go! Go! Go!