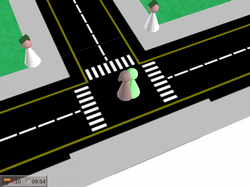 Third time for us in pyweek. This time we'll write a readme too.

We also have a new member now, IIDQD, so now our game will be fully 3D.

Post-pyweek and suggestion for PW4

Just some things i wanted to write down:

Models
In the end, we have no models in the game (only coded glut functions), due to technical
difficulties (our modeler is down). Too bad we wasted so much time on writing and debugging
model-loading code. I guess next time we will prepare ourselves in advance to having no models
at all.

Bugs:
* Transparency problem in in-game left-bottom menu
* Time is reset when returning from paused mode
It looked like it would take too much time to fix them (They are a result of a design problem,
or the lack of it to be precise) so we postponed the fixing and so they got here.
However they don't *really* bother the game (If you don't pause).

Submission
We finished the game (at the current state) some 20 minutes before the deadline, but the server was too
loaded so i don't really know if the game will end up on the entry list.. :/
A suggestion: Everybody must upload their MD5 of the files until the deadline, and after they
will have a week to upload the files themselves, and so the server will handle just fine, and noone will waste
so much precious time before the deadline on uploading

it's already wednesday and all we have so far is a rough idea of how the game should look like,
some classes to support levels, and plans what to do next, that were suppost to be done today..
(though uri has a POC for citygen.. today he was the one to do something..)

We really have to start some 3D drawing soon, or it will never end..

Similar to "Where's Waldo", but with a whole 3D dinamic scene.
Also, the character won't be waldo of course, but codename 'Orazi'.
(i lost it there.. i have no idea why would someone want to find him.)


Anyways, this is the general idea. We have until thursday to develop this
to a complete idea (more will be posted here).
In the meanwhile post your comments here!

Steamer - Final Version
I promised to continue working on the steamer game and make it better. well, i did that and although i still have many ideas to add to the game, i can proudly say that now it is fully playable.

You can download the game here (250Kb compressed).
Be sure to read the readme this time! (and again if you have read it before - as for now you can understand from it how to play)