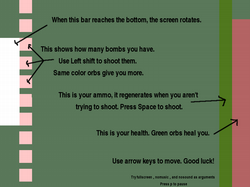 
2% respondents marked the game as not working.
Respondents: 46

It's basically a few functions that I don't want to have to recode for pyweek. I imagine after pyweek I could expand it into a block game library or a library with more general functions but I doubt there is much demand.

Here are some theme combinations so can have all your bases covered. :)

Twinkle + Turmoil + Ticking + Tyger + Twinkle: You are trying to set a world in turmoil by causing it's sun to run out of time.

Let's say I use txt files to store information for levels and I don't want people to easily edit it. Is there any way to obfuscate this information?

How to add a screenshot

Everyone, just use the upload script provided with skellington and you'll be able to upload like I did. Until richard fixes the web form.

Warning, music by a chipmunk.

Let me know what you think of the controls and background music. Also, if you know how to tell if a music file has stopped playing, that would be very helpful.

to download. New sounds, new enemies, shift to shoot bomb. One big level to test them in.

I'm going to be busy tomorrow so i stayed up making sure everything was good and adding a exe file. I hope you all enjoy my entry, I think it's going to do really well.

I'm not the admin but I wanted to copy the style a little. :)
Anyway. tomorrow I'm going to post a page with any bugfixes I can find so people can get them working and testing the games.
Please post and bugs and any fixes here that you know of.

Hey I was thinking of possibly continuing work on my game. One idea that came to me would be a level editor. I could probably pretty easily make a level editor and start adding more enemies and such.

If I made and editor and a site to upload levels to do any of you think you'd be interested in making some?

Someone suggested a wiki page for bug fixes.

it probably won't get used but feel free to edit eugmanhome.com/pyweek/

I was wondering if anyone had any experience packaging a game for .deb?


I am really happy with how well I did. The controls were rather polarizing. Either you thought they were a great idea or they were stupid,unintuitive,lame or even the only thing adding any challenge.

Most people also seemed to enjoy the ridiculous music although I probably should have provided another option for the people who didn't.

While I'm sure there is much I could have improved witht he game I'm rather happy with the completeness of it.


Check back at my site eugmanhome.com in a week. I should have everything updated by then. Feel free to post here suggestions like if I should clean up the code and everything or just leave it as is and start on some new game.