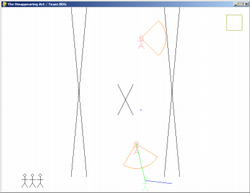 opponents now only detect squad members within a cone of vision

Yet another team of one.

Yet another first time PyWeek participant.

Previous BDG productions include "Infection Wars", from a LD48 competition. And numerous projects that I never got around to completing.

If you had asked me to guess how many lines of code I had written on this today, I probably would have gone higher than this.

I expect that I won't write as much code per day during the week - in part because I won't have as much time, but also because as the project gets closer to the end, I expect to spend time replacing my OpenGL stick figure art with something more presentable.

Hm, there's even the danger that as I remove programmer (code) art and replace it with programmer (drawn) art, my lines of code will go down.

I've reached a build that's actually playable - I can win or lose the game now. There's much that remains to be added, including angle of vision on the opponents, dialog boxes, music, menus, splash screens, the store interface, the "weapon" system, and savegames.

But you know, not so bad for a day's work.

Decided on a direction (for now)

Going to go with codename AHDN, at least for now. It resembles a game I wanted to make, anyway, so it's worth screwing around with.

Codename Dikkens: A retro approach to a mystery story

I must have miscounted - the contest started 24 hours earlier than I expected. Nuts.

Fortunately, I've got three separate game ideas that I've been toying with under this heading: